It has been almost seven years since both Simon and I were in Australia at the same time. We were very excited about stopping by as we cross Oceania from West to East, especially since we have some very good friends living there. Sadly, due to the nature of our trip and the fact that Australia is noticeably more expensive these days, we could only allow ourselves a brief stay so we really wanted to make the most of it.

Our first stop was Melbourne, Australia’s second most populous city. It was my first visit too, the third for Simon. We stayed for five nights, in a nice apartment in the middle of Richmond we rented via Airbnb, very well located and easy to get around from – our host, Daniel, was lovely and gave us lots of ideas for things to see and do. Thankfully, the weather wasn’t as hot as we had anticipated (it had reached over 40°C some days back) so we could be out and about in the Melbourne sun.

On the slight (and arguable) downside, any illusion of keeping to the reasonably healthy lifestyle we had acquired in Asia, where wine is not very good and expensive, or good and very expensive, so we mostly abstained, went out of the window practically the moment we touched down in Australia. It didn’t help (or rather it did) to find a superbly stocked bottle shop (sic.) just around the corner from the apartment. No dry January for us!

When not deciding between the Riesling and the Cabernet Sauvignon, we set out to explore some of Melbourne’s more interesting areas, like the exuberant Botanical Gardens, St Kilda and its very lively beach (there was a beach volleyball tournament going on, as well as a lot of kite surfers), and trendy Fitzroy (think a sunnier, more suburban version of London’s Hoxton) 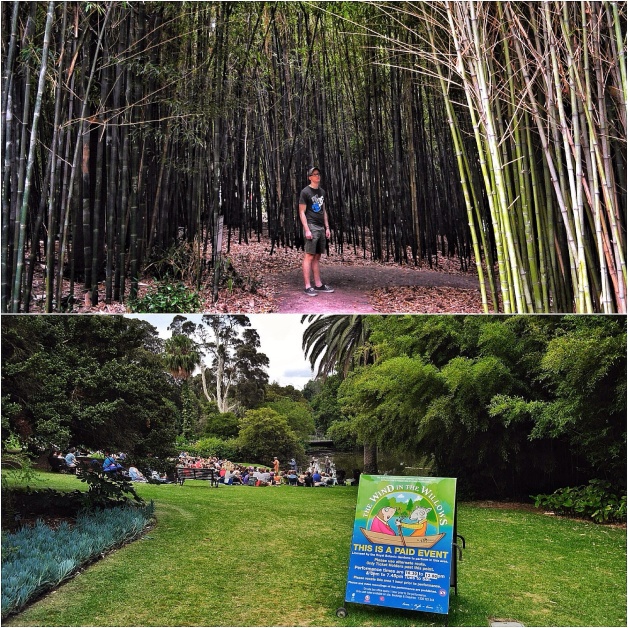 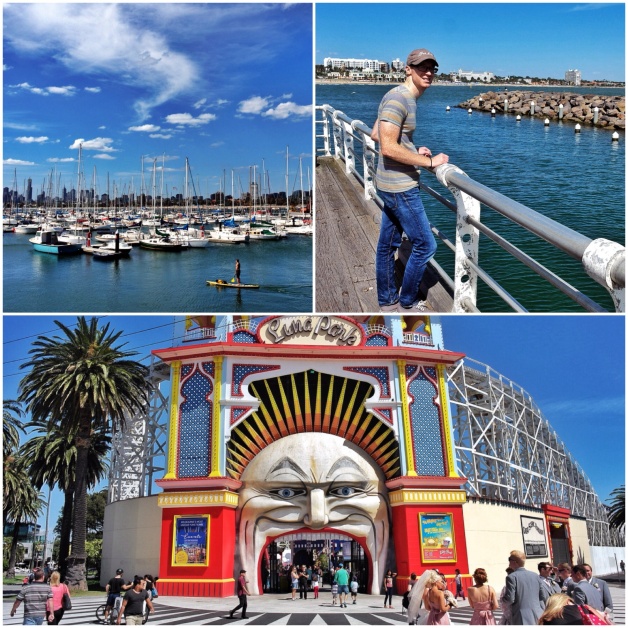 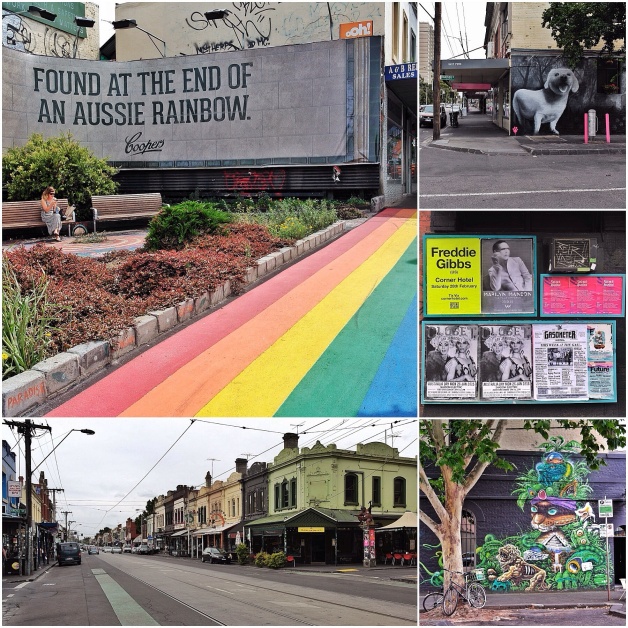 We also managed to find ourselves in the middle of two of the biggest events in the city’s calendar: the Midsumma festival and – most amazingly – the Australian Open, where we got to see Rafael Nadal play his first match of the tournament (sadly he didn’t make it to the final this time), it was awesome. 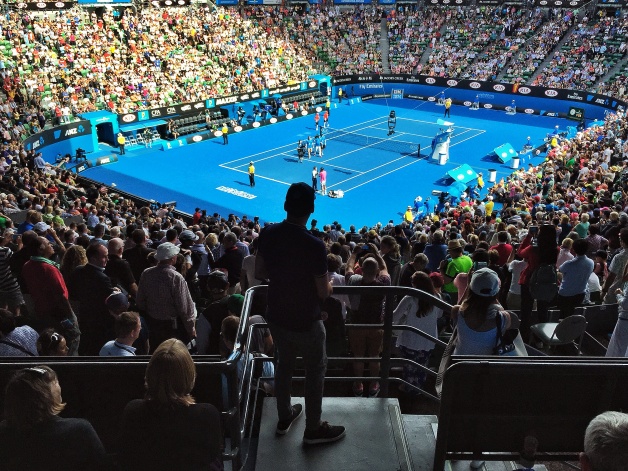 Melbourne, in short, was a blast. The days just flew by, and suddenly it was time to move on.

Our next stop, after a short flight, was Sydney. We were kindly hosted by Anthony and Trevor – whose year-long travels around the world some time ago were the inspiration for this trip – in their beautiful house in Randwick, very close to Bondi Junction so we squeezed in quite a few trips to the Westfield shopping centre there… We had seen the boys briefly back in London only a few months ago but it was great to see them again, and their utterly lovely dogs: Emma, Bonnie, and Scooby.

Fortunately, our stay coincided with a three-day weekend because of Australia Day, and we were able to see and catch up with the rest of our friends in Sydney, including our also adventurous housemate Luke, who also happened to be in town by happy coincidence.

Sydney was amazing in many ways, one of which took the shape of a much missed musical fix for me. Having only known the building from the outside, I finally had a chance to go inside and watch a performance at the iconic Opera House and meet some of the cast afterwards, courtesy of my dear friend Alex who runs her own very successful artist management company and had come in support of one of her singers, Hannah Dahlenberg, a remarkable Queen of the Night. It was a wonderful evening. 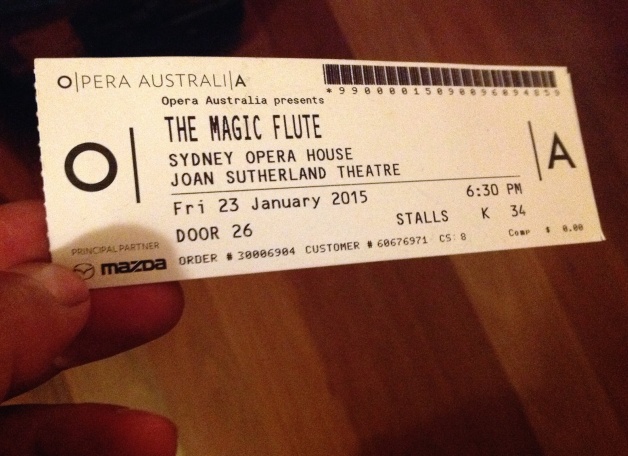 Alex was kind enough to show me around the front of House areas during an unusually long interval apparently caused my a mysterious problem backstage (at one point we bumped into the Company Manager, Allana Sheard, who just looked at Alex and exclaimed “I have no idea!“) so I could marvel at the design of the building. We paused briefly just outside the door to the auditorium towards the end of the interval when a man walked past and as he did he said to us: “The Queen of the Night… Only dogs could hear her!” before disappearing inside the auditorium, leaving both Alex and I, who had heard the Queen quite clearly, rather bemused. Alex’s husband Loz met us at the end and we walked over to a very cool pub for dinner and drinks with Simon and the boys.

I saw Alex and Loz again the following evening after more opera, this time in the park, which I’d come to see with a mutual friend: the gorgeous Lady Ramsden. Simon likes opera as much as he likes Tolkien, so he went to meet his friends instead, missing a collection of opera’s greatest hits which the huge crowd lapped up and with some very impressive singing too. Just as the last note rung out the skies opened (likely unrelated) and it just didn’t stop raining for the rest of our stay.

We also celebrated Simon’s birthday over the weekend, with a traditional barbecue at the house, generously provided by Anthony and Trevor, with Andrew manning the grill, and buddying writer Greg entertaining us all with humorous anecdotes of the kind that cannot be repeated here. Simon was so pleased he even gave a speech (he never does) on how much he was enjoying his birthday this year.

Then Australia Day came and as it was realistically the last chance to see most of our friends before everyone went back to work we decided to brave the rain and try to see as many people as possible, and so we started by heading off to Surry Hills for an indoors picnic at one of Sydney’s top beauty salons (as one does), with its owners Richard and Asim and some of their lovely friends. Richard and Asim are two of the first people I met when I moved to London in 1997 and I hadn’t seen them since I was last in Sydney seven years ago. I was very happy to see them now, but most of all I was bowled over by their amazing five year old twins Azra and Wednesday. It was a real pity that we couldn’t linger as we had to leave for our next engagement. Alex and Loz were giving a barbecue in their lovely home in Manly Vale, where we arrived just in time for some mouth watering lamb. Once again we had to make our excuses far too soon, and hurried to our next and final engagement to meet Andrew and Dean in The Rocks – Dean is a cake designer, which is a much better job title than I will ever have, and runs his own brilliant business in Sydney. We had drinks at the bar of Sydney Theatre, a super cool space on the wharf with amazing views over the harbour, and then moved on for dinner at a trendy Italian nearby, while outside the drizzle turned into a downpour. Those familiar with Sydney will realise just how much of the day we ended up spending going from one place to another, but it was all well worth it.

We would have loved to stay longer in Australia – we had even pencilled in a trip to Byron Bay when we were planning our itinerary – however it could not be this time, and we find ourselves currently traveling around some pretty amazing surroundings in New Zealand… More of that on the next update!

2 thoughts on “Down Under.”