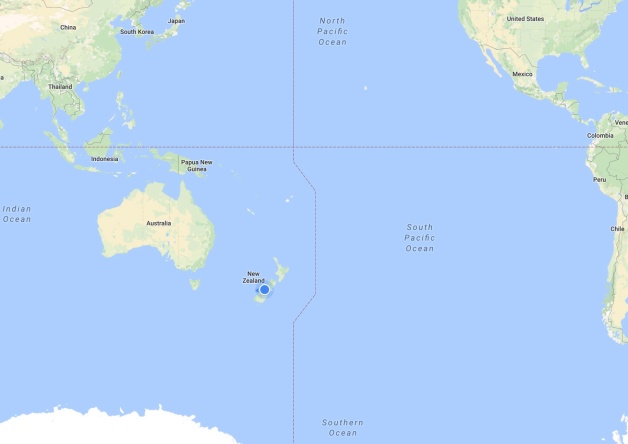 After two great weeks in Australia, we arrived in New Zealand’s South Island, landing in Christchurch just after midnight. Our first couple of hours in the country were a little underwhelming: first, we had to declare our walking boots to customs as a biosecurity risk, then the elderly taxi driver who drove us to our hotel made a racist comment about people “in a turban” overcharging, and finally the night shift receptionist at the hotel greeted us with the warmth and charm expected of a US immigration officer. Welcome to New Zealand.

Christchurch has not recovered from the earthquakes that devastated it in 2011 and 2012. Whole blocks in the centre have been demolished and the sites cleared, but many buildings remain fenced off and empty, an eerie sight. There are, however, construction works all around the centre, as well as signs of regeneration, like Re:START, an outdoor shopping area made entirely of shipping containers transformed into shops and cafés. 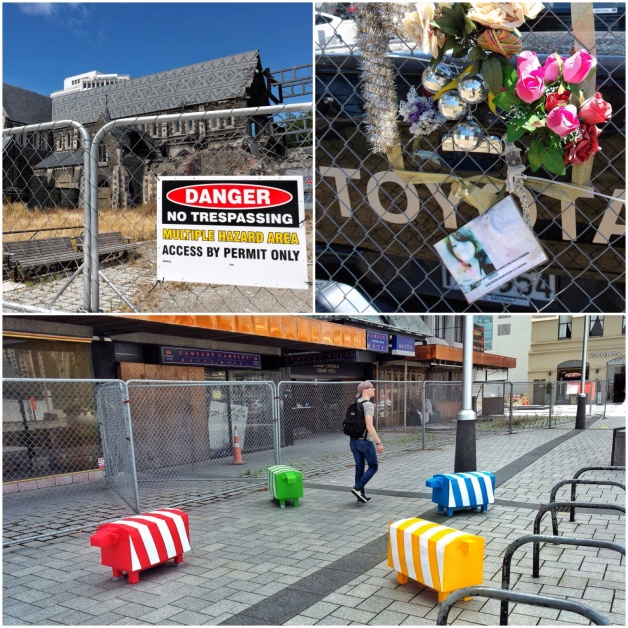 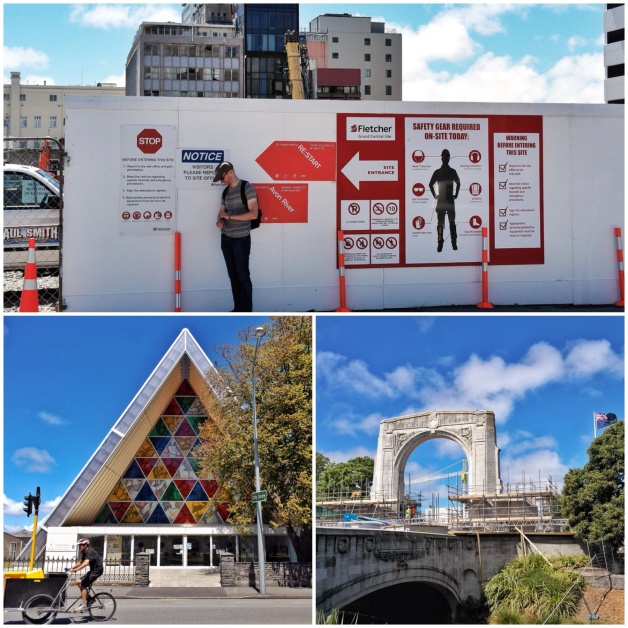 After a day seeing what was left of the city we departed early the following morning on the TranzAlpine across to the west coast, heading to Franz Josef glacier. We passed stunningly beautiful scenery on the way that seemed straight from a film set – as, indeed, it is. Franz Josef glacier is unusual for descending almost to sea level, ending in a rainforest. Once settled in, we hiked around said rainforest and up to the edge of the glacier – which has retreated rapidly in recent years and it is now not safe to get too close to it, but it remains an impressive sight. The surrounding countryside brought back distant memories of geography lessons. 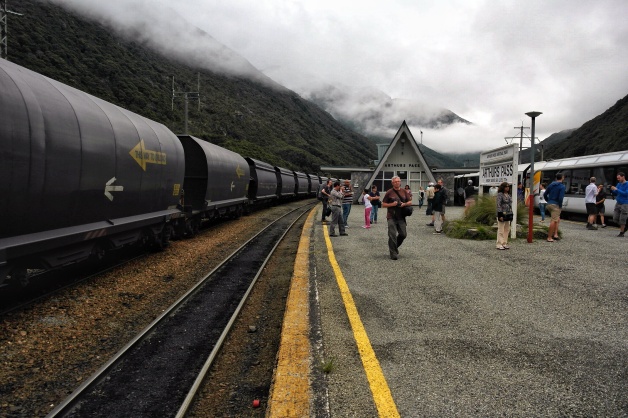 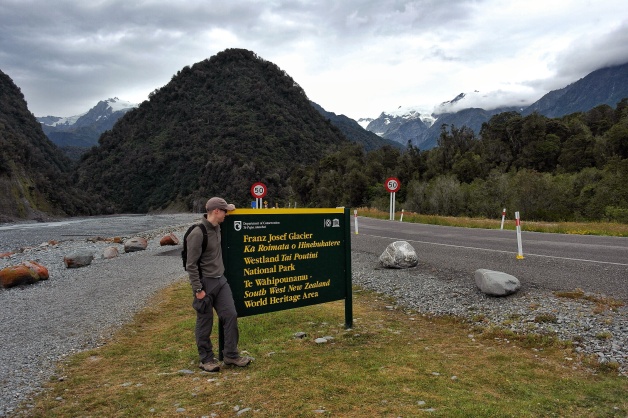 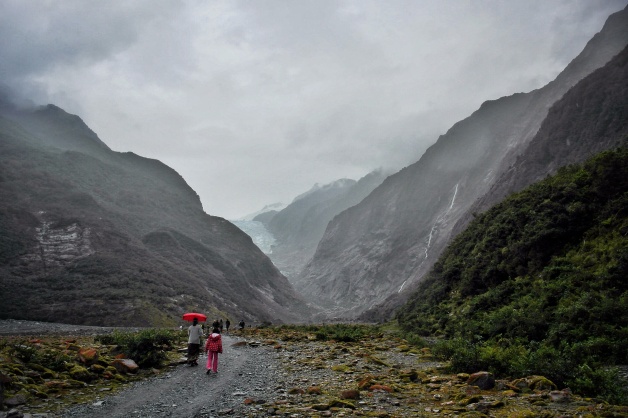 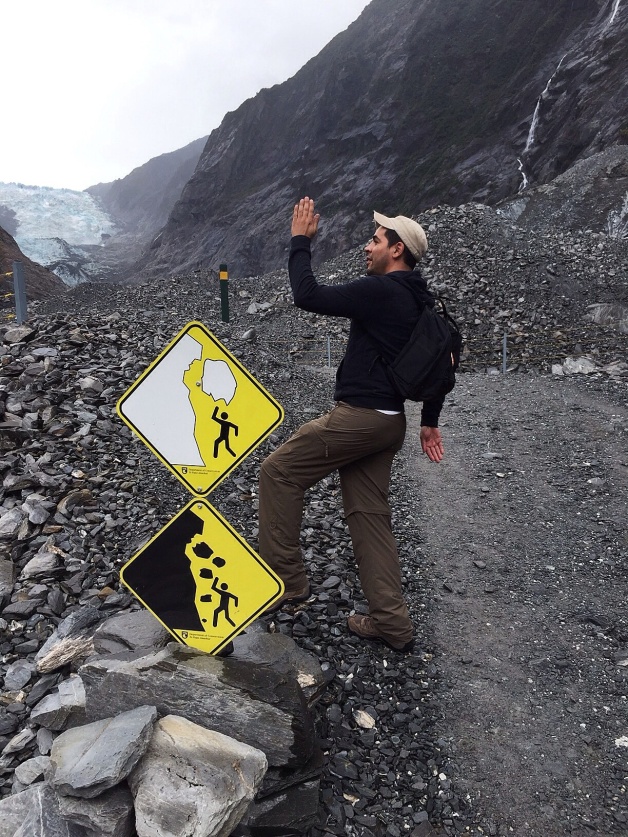 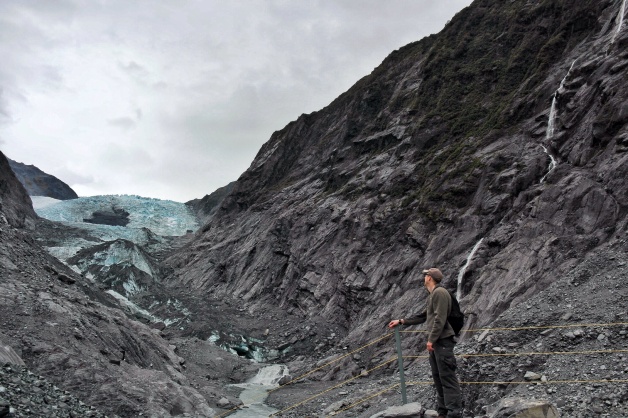 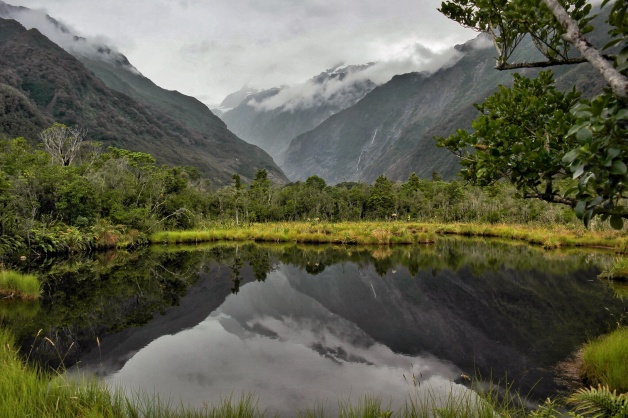 Our next stop was Queenstown. Actually there were numerous lengthy stops before the bus finally arrived in Queenstown, almost nine hours later. Despite more beautiful scenery (which after a few days here I almost stopped noticing), this was a painful trip: after a driver switch mid way, the new driver, when counting the passengers, saw that some were trying to sleep and said loudly “Comatose heh? We’ll do something about that!“, and then proceeded to talk over the loudspeaker nonstop for the entire trip, covering such fascinating subjects as his favourite type of apricot. After some other similar bus journeys I came to think that severe verbal diarrhoea must be a required qualification for bus drivers in New Zealand.

Queenstown is a centre for outdoor activities (such as the original bungy jump) but it was far too cold and wet to do anything like that. [Note from Xavier: yes, we definitely didn’t bungy jump because of the weather. Seriously.]

The area is also a wine producing region, so we visited instead one of New Zealand’s oldest wineries, where Xavier got to see what all the wine he drinks in a year looks like when in one place. [Note from Xavier: Simon thinks he is joking.] 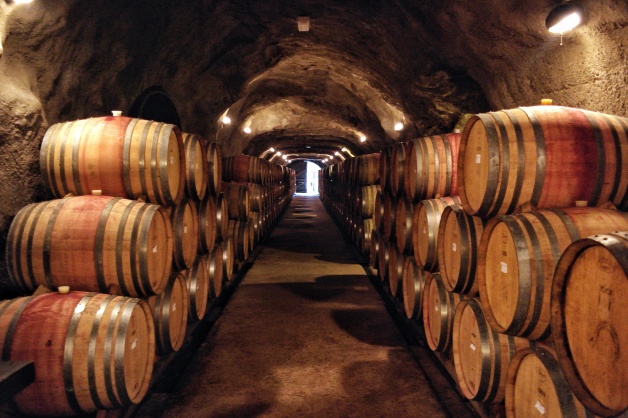 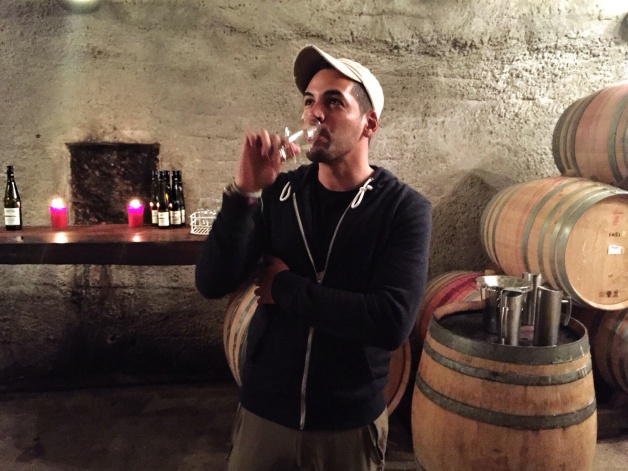 On the road again, we drove a hire car to Te Anau on our way to the Fjordland at the far southwest, to visit spectacular Milford Sound. We stopped a few times along the way, including for a breathtaking (literally) uphill hike at The Divide through more rainforest, to barren mountaintops shrouded in clouds. 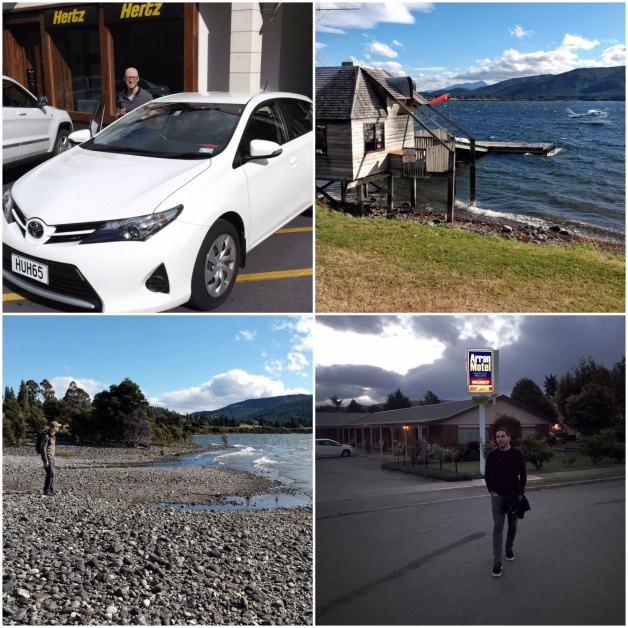 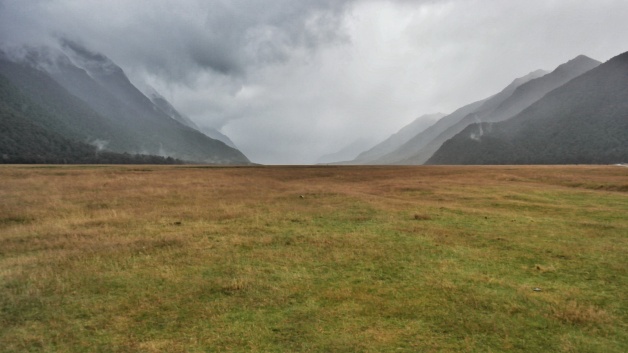 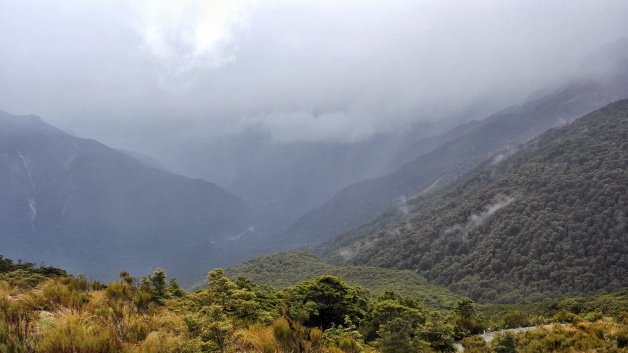 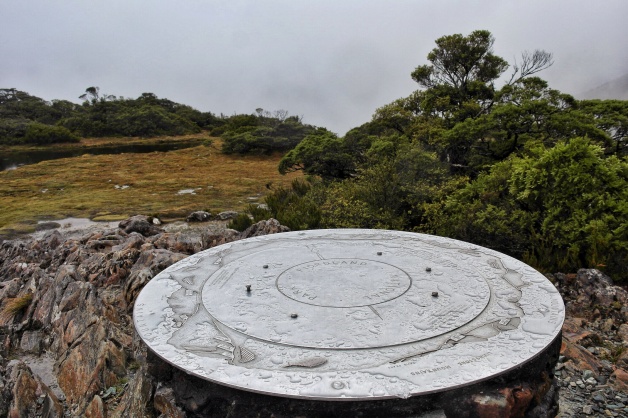 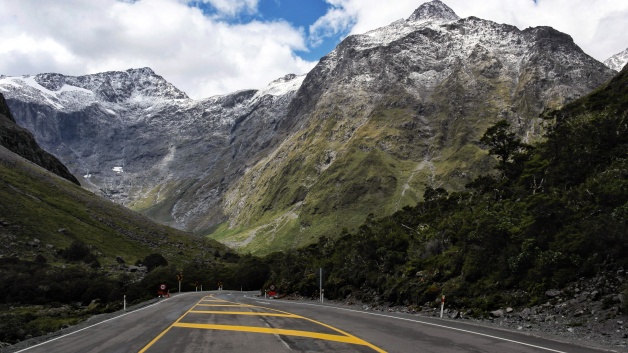 At Milford Sound the mountains drop directly over 1,500m to the water below, and when it’s been raining (as it had been in biblical fashion when we visited) hundreds of temporary waterfalls crash down along the vertical walls – and in some cases, where caught by the strong wind, vanish mid-air. We took a boat tour of the fjord, all the way to the Tasman Sea and back. The fjord is vast yet its entrance is very well hidden from the open ocean – so well that Cook bypassed it twice on his journeys along the coast. We were lucky enough to see a pod of bottlenose dolphins swimming and jumping out of the water very close to our boat, and a herd of sleepy seals on the rocks at the bottom of the cliffs. Also in the fjord was super yatch Serene, allegedly owned by Russian billionaire Yuri Shefler, which had made the local news. 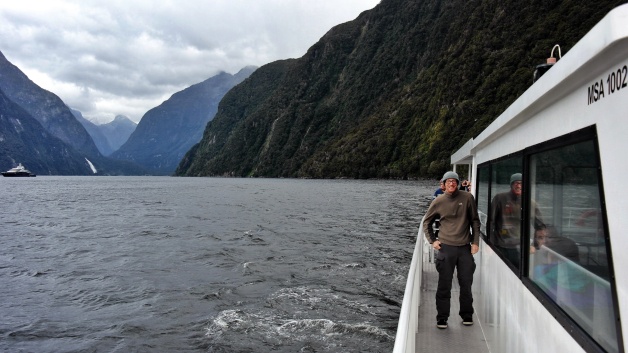 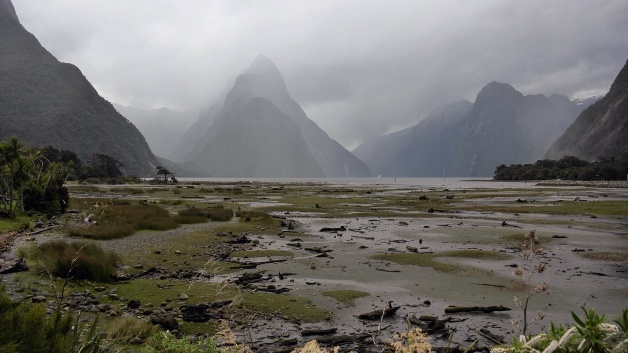 New Zealand is one of the most expensive places we have come on this trip, which has entailed certain economising. Xavier has taken to this with unrestrained enthusiasm, particularly the need to stay in backpackers hostels (for Queenstown he suggested about twenty alternative places, all “just a little” more expensive) and prepare some of our own food (“but there must be good cheap restaurants” – with Michelin stars, presumably).