ARGENTINA
Jujuy province to Buenos Aires – and the journey home.

by Xavier (and Simon)

Well, we have now completed our journey across South America, from the Caribbean coast of Colombia all the way to the capital of Argentina. This is also the end of the third and last leg of our trip around the world; it’s amazing how these six months have just flown by.

Crossing the border between Bolivia and Argentina was quite uneventful. Our bus from Tupiza dropped us at Villazón and we just walked to the immigration control and into La Quiaca, in the northern province of Jujuy, where we got on another bus to Tilcara – a journey we had already done once before, in 2009. It was great to be back in Argentina. 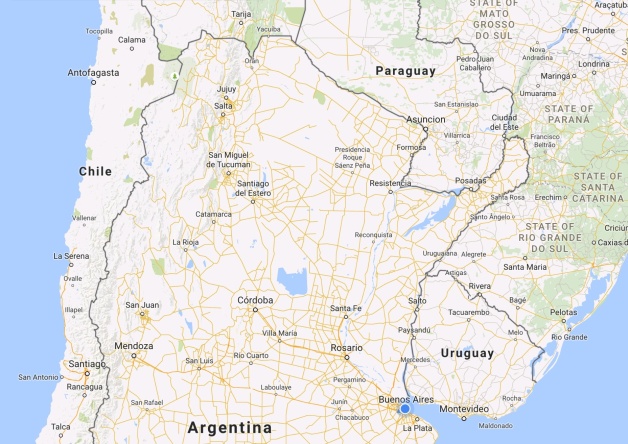 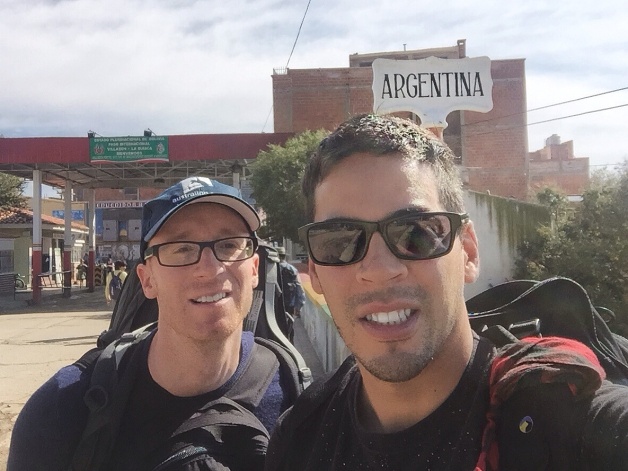 Argentina is a very special place for me. My great-grandfather took his wife and their numerous children across the Atlantic from Spain to Buenos Aires via Montevideo in the early 1900s, and settled there for some years before returning to Europe. All of his children, mostly grownups by then, remained in Argentina except for his youngest daughter – my formidable grandmother – and as a result, I have an extensive collection of relatives in Buenos Aires and other cities in Central Argentina, that probably account for at least half the family. It was only ten years ago when I travelled to Argentina for the first time. I fell hopelessly in love with it and I have been fortunate to visit many times since. But I digress…

Tilcara is lovely, perfect for enjoying the great outdoors. As we had been before, we had planned to stay only two days but ended up staying five, making good use of our walking boots whilst getting to know the area more. Simon visited the Pucará, an archeological site just outside Tilcara, on a day when I was happy to just sit in the sun; we both hiked around Purmamarca, and through the Red Canyon at Quebrada de las Señoritas, in nearby Uquía – driving on the way past the highest vineyards in the world, Viñas del Perchel, at over 2,600 metres; they produce a small amount of fine altitude wine every year. Of course we took full advantage of the excellent food and wine on offer in Tilcara – compared to Bolivia we had died and gone to Heaven here. The very first restaurant we tried on our previous visit is still open and probably the best place to eat for miles; totally recommended. We were also really well looked after at the great B&B we stayed at – if you are reading this, thank you Mara (and Tomás) for the hospitality, we wish you all the best! 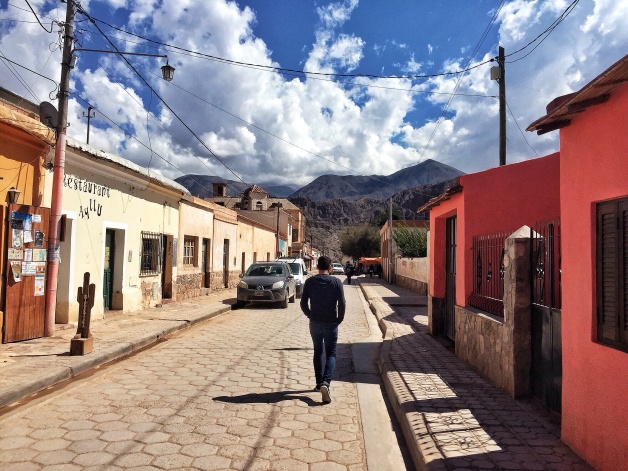 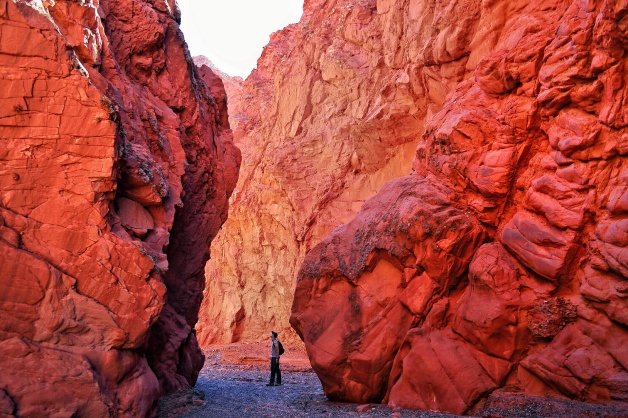 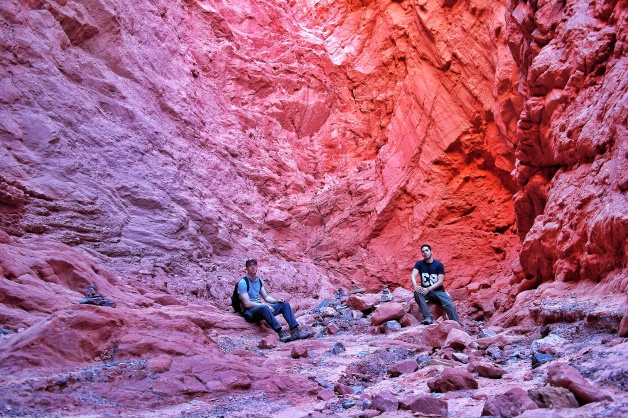 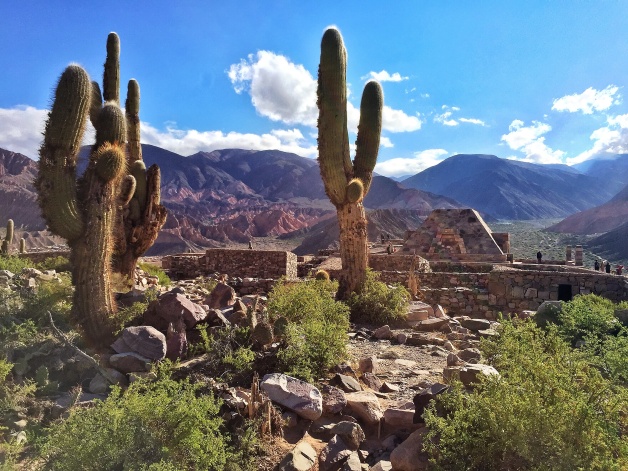 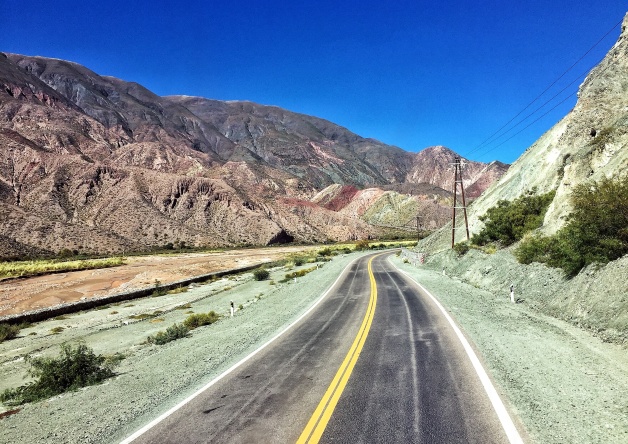 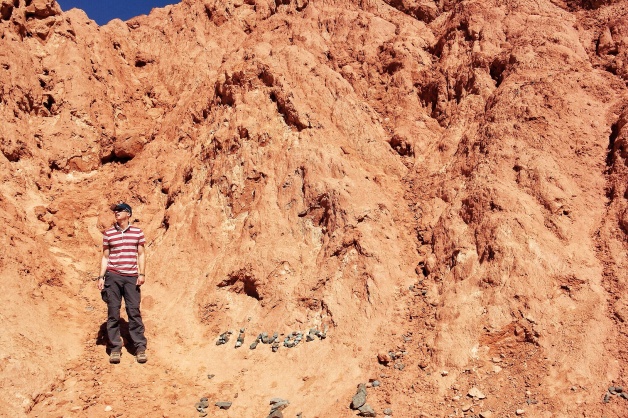 We were sad to leave Tilcara but it was at this point when it downed on us that we didn’t have much time before we had to reach Buenos Aires, so we pressed on and headed to Salta on our way to Cafayate, a place we’d wanted to visit for a long time. Not entirely coincidentally, some of the best wine in Argentina is produced there.

Salta hadn’t changed much since we were there last four years ago. We just stopped for one night to break the journey and change money. We stayed in a very cheap and highly praised hostel a short walk from the centre of town, which I guess was ok – hostels in cities are seldom brilliant – but our room made the underside of a bridge look like a suite at Le Méridien so I was glad we didn’t stay longer. Alas, such are the joys of backpacking.

Cafayate turned out to be a very pleasant little town. The countryside around it is ideal for the production of Torrontés (white) and Tannat (red) wines – though other varieties are also produced. The vineyards are planted at over 2,000 metres, so the wine produced is known as “altitude wine” – vino de altura. We only stayed a couple of days, in a rather nice hostel and spent our time visiting various wineries, where we learnt about the local wine making process, and got to sample different wines and take some with us too – which presented us with the challenge of finding space in our already overstuffed backpacks (we managed). 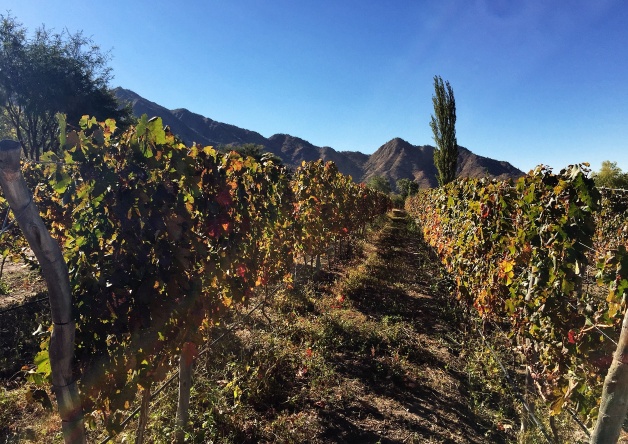 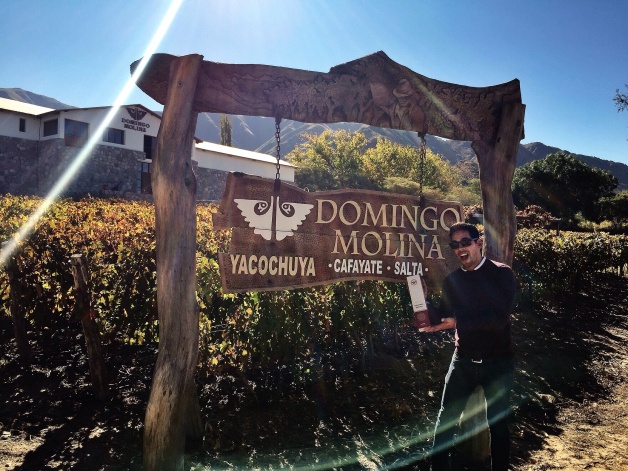 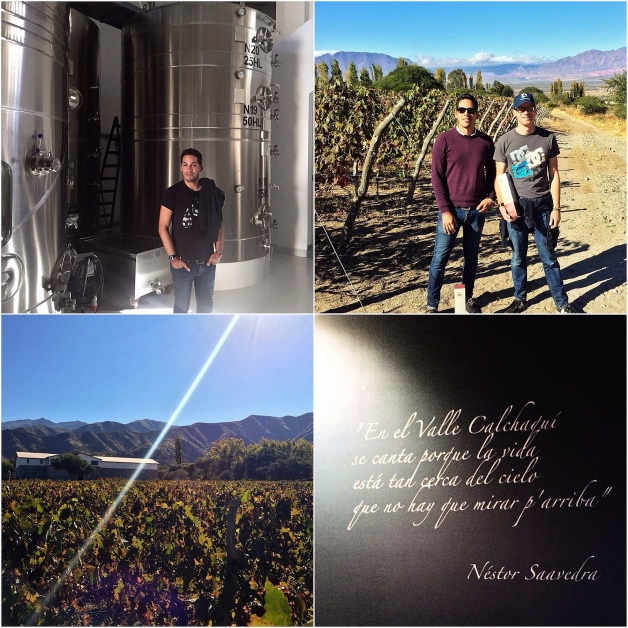 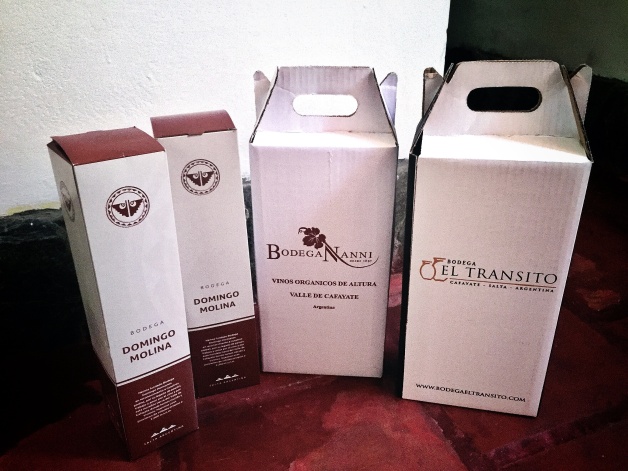 Argentinians are a funny bunch…

It is impossible to spend any time in Argentina without being fascinated by the people, their accent, the way they go about life. Conversations invariably turn to the country’s political and economic woes – the scale of which makes most similar issues in Europe pale in comparison.

Argentina is a relatively rich, developed country but has a long history of really, really awful governments. This dates back to at least the 1970s and early 1980s, when the CIA installed murderous military dictatorships in most Latin American countries – applying the expression “Better dead than red” literally. But Argentina’s brutal dictatorship managed to go further than the rest by murdering far more people (a particularly heinous killing method was to throw perceived “enemies” off military aircraft over the sea or inside volcanic craters, alive; thousands died this way), as well as collapsing the economy and starting a war. Successive governments after the dictatorship have been content with stealing from the people rather than killing them – although that is now being debated – but the tradition of collapsing the economy continues. Which brings us to the currency issues we have had here. 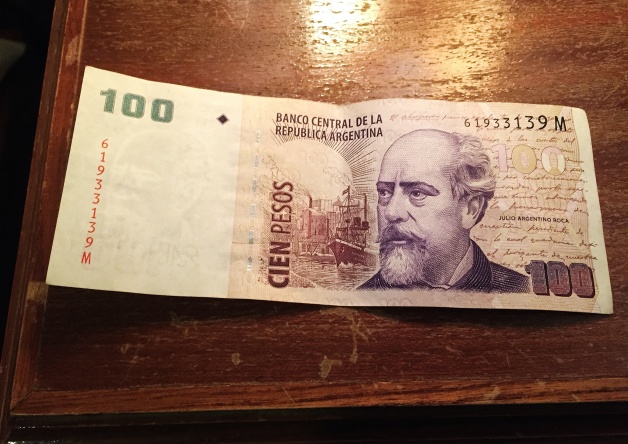 As Argentinians have learnt not to trust their government with their money, they prefer to hold US dollars. This has generally been accepted but the current government has tried to maintain an artificially high exchange rate in order to combat the high inflation that in parallel it forges national statistics to show does not exist. Officially, the exchange rate is around 8.5 pesos to the US dollar – the dólar oficial – and that is what we would pay if we took pesos out of an ATM with our foreign cards. But it is not possible to buy dollars at that price, except perhaps if you are very well connected. Argentinians are allowed to save a bit in dollars under conditions, for a 20% surcharge (the dólar ahorro), and they can use credit or debit cards abroad, for a 30% surcharge (the dólar turista). Otherwise, if they need dollars (which they often do – many transactions including property are set in dollars), they turn to the black market (the dólar blue): the exchange rate is usually between 12.5 and 14, and is published each day in the newspapers – despite being technically illegal.

This is economic lunacy. It means Argentina’s exporters are crippled, foreign investment is deterred, and imports are artificially cheap. In turn, the government has sought to limit imports by imposing largely arbitrary restrictions, but this means Argentinian industrial plants have closed because they are not allowed to import spare parts from abroad, and many foreign companies have quit the country. It should also mean that Argentina is a relatively expensive country to visit, deterring tourism. Except, of course, that no half-sensible tourist pays the official exchange rate. Tourists bring enough dollars in cash to cover their entire stay in the country – we crossed the border from Bolivia with US$2,000 distributed about our backpacks. The fact that everyone does this would seem to make people crossing the border an obvious target for robbers, but this doesn’t seem to happen. Changing money on the black market is easy – it’s advertised everywhere. In Salta the traders stood outside the official bureau de change on the main square, undeterred by the presence of copious numbers of police, who clearly didn’t care about it – or the large “Legalise cannabis” demonstration we saw, where many of the participants were openly smoking it. We have spent a lot of time here checking and comparing exchange rates, and although we rarely got a rate as a good as the “official” black market rate published in the newspapers, this has allowed our budget to go a lot further than it otherwise would have done.

After Cafayate we had a good 20 hour bus journey to Rosario via Tucumán, where we stopped briefly to grab a bite before getting on an overnight freezer, sorry, bus. The last time we were in Rosario we also stopped for one night only and stayed in a fantastic hotel way beyond the budget for this trip, but still managed to find a very decent alternative in the centre. We needed to change more money but failed to spot any street traders – the Police cracks down every now and then. The helpful concierge at our hotel (one of the girls if you ask me) pointed us to a local pub a short walk away where we had no problem with the transaction. Later that evening we met my cousin Rodolfo and his partner Emilia, who had driven from nearby San Nicolás to see us. They gave us a tour of the city and then invited us to a lovely dinner, which was extremely kind of them. Both of them are chartered accountants, it was very interesting to hear their views on the economy, politics, and the rampant corruption that affects all levels of public administration in Argentina. 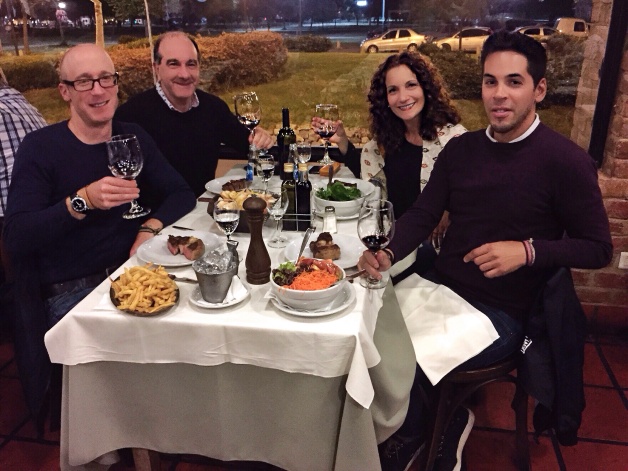 Buenos Aires has always felt like a second home for us. It is very much a grand European city in the heart of South America – also a city of stark contrasts: the bus from Rosario dropped us off at Retiro station, next to which we were shocked to see a growing shanty town, known in Buenos Aires as La Villa, which wasn’t there four years ago. We heard that Argentina is having a serious, increasing problem with drugs and everything that comes with them, which we found terribly sad.

Social commentary apart, we wanted to end this trip on a high note so said no more hostels and rented instead a really cool apartment in Palermo via Airbnb. Some years ago most of Palermo was a practically derelict, sprawling working class neighbourhood with high levels of crime. Today, one can find more and more restored buildings, modern apartments, trendy hotels and restaurants, upmarket shops, cafés, and a younger, more middle class crowd.

Our five days in Buenos Aires were very chilled. We mainly hung out with my cousin Christian and his family – we always have a great time with them – and visited my “aunt” Lucía (her father was one of my grandmother’s brothers but she was more like a sister to my mother – feel free to read that again) and her husband Basilio, whom I love dearly, as well as their many children and grandchildren.

We also treated ourselves to more steak and wine, obviously, though that’s practically all we have eaten since we arrived in Argentina and we are both seriously craving greens and fresh fruit! 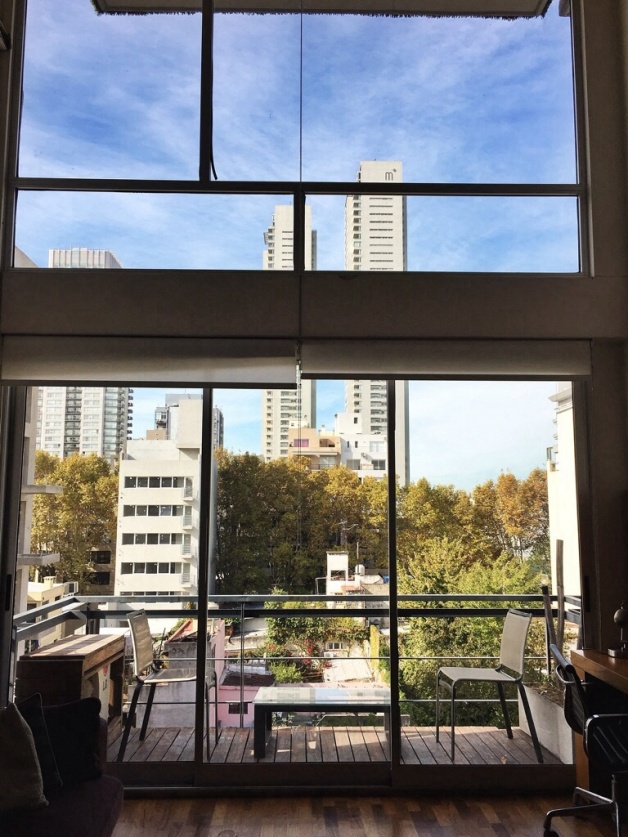 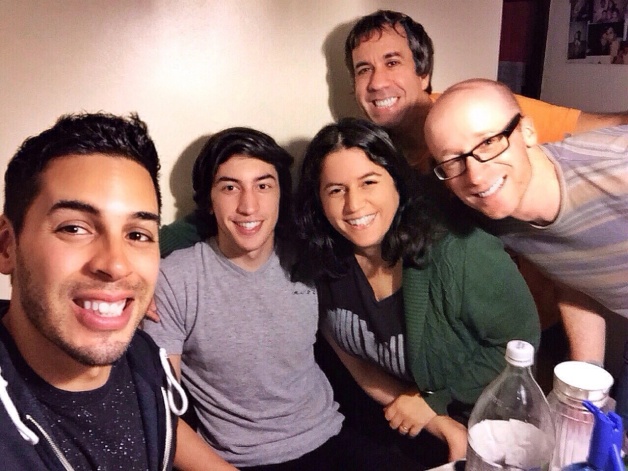 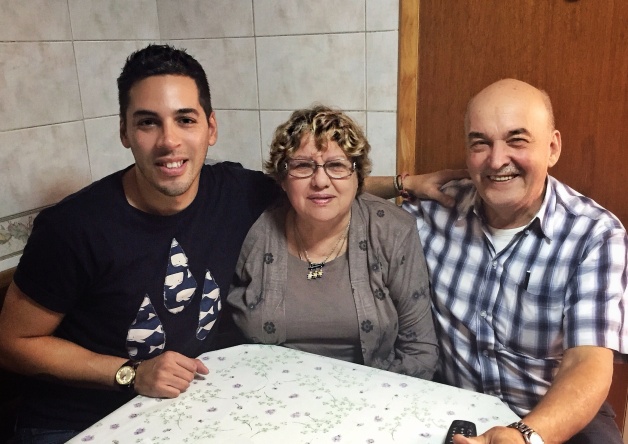 And suddenly it was time to pack and head to the airport to catch our plane home – where we arrived today after an overnight flight to Madrid and a connecting flight to Heathrow, both courtesy of Iberia (“your cabin crew will ensure that no comprehensible English is spoken on this flight“).

It was nice to encounter rain and severe delays on the Piccadilly Line on arrival at Heathrow – it’s as if we’d never left. We should now enjoy a quiet weekend before returning to the daily grind next week. We’ll try to post one more entry to the blog over the weekend. A final round-up of the trip, as it were.

In the meantime, we’re home!