There is an English pub (take this appellation with a pinch of salt) in La Paz called Oliver’s Travels; on one of its walls it reads: “IF WE CAN’T REACH YOUR STANDARDS, LOWER YOUR STANDARDS.” – which could very well be a slogan from the Bolivian Tourist Board. This is by no means a criticism. Yes, Bolivia is the poorest country in South America and that is obvious to any visitor, but at the same time it is still one of the most fascinating destinations.

This part of our trip echoed two previous visits to South America; one in 2009 when we travelled around Perú, and another one in 2011, when we travelled by land from Bolivia to Argentina for the first time and almost exactly to the date. Puno didn’t seem to have changed much in the six years since our last visit, which is a shame, but we were only stopping for one night to break the journey into Bolivia, so it didn’t matter. People mainly come to Puno to visit Lake Titicaca and its attractions, and/or on their way to Bolivia – like us on this occasion. One of the guys with whom we did the tour of the Colca Canyon had also travelled to Puno with us and we met briefly for pizza and beer in the evening, after we’d left our backpacks in the rather forgettable hotel we’d booked for the night. And that’s about it. We were off to La Paz in the morning, stopping in Copacabana to change buses after crossing the border with Bolivia. The bus from Copacabana dropped us in the centre of La Paz about three hours later, having spent a fair bit of that time driving through El Alto…

La Paz was just as crazy as we remembered. The same chaotic traffic, the multitude of street vendors, the long steep streets that, with the altitude, really put one’s lung capacity to the test. I loved it. The city sprawls over a vast canyon, with its poorer suburbs – El Alto – at over 4,000 metres, and its much wealthier neighbourhoods about 1,000 metres below. We found a nice looking hostel in the historical centre, which is more or less half way up, and where most travellers stay. We didn’t really do much while in La Paz, as we had already seen most of the more interesting sites before, so we mainly concentrated in finding nice places to eat and drink, which in La Paz can be a bit of a challenge.

These days the city boasts a growing shiny cable car network – the Teleférico – that connects far-flung neighbourhoods, and the chance to check it out proved of course irresistible for Simon. It is certainly a great way to get a measure of the size and shape of La Paz. One of the lines takes you from Sopocachi, a very trendy neighbourhood, down to a newly built area at the bottom of the canyon where you can find the rather incongruous Megacenter; a huge modern shopping mall that would rival the average Westfield – though in size only – but which on the day we went had only a tiny handful of people in it, with most shops totally void of customers, as if we were in the Latin American equivalent of Pyongyang. Very odd.

Always in search of the next death defying thrill, Simon had been very keen from the start of the trip to get to La Paz. One of the main attractions for visitors to La Paz is the cycle ride down the road to Coroico, in the jungle nearly 3,000 metres below the city. Universally known as The Death Road, it was labelled the world’s most dangerous in 1995 when it was still the main route for traffic down from the city – in one infamous incident a bus drove off the edge killing over a hundred people. A new paved road opened in 2007 and the old road is now used as a tourist attraction. Insurance is required – not surprisingly – but our insurer, Columbus, wanted a whopping £140 to add a day’s mountain biking to our travel insurance, requiring us to retrospectively buy it for the full five months we have already been travelling for. So we didn’t go – thanks guys, we’ll use a different insurer next time. Alas, it might be worth pointing out that mishaps are not uncommon every year so, to be honest, I wasn’t entirely disappointed that we didn’t do it. This item on the BBC website expands a little on the subject.

As we looked for other interesting things to do or see in La Paz we came across Cholita wrestling, an extraordinary thing indeed which we also missed on this occasion, but which I have penciled in for the next time we come to La Paz.

Going back to our hostel, it was rather nice and in a great location, and the staff were terrific, especially the lady who runs it; but our room was tiny, had no ventilation other than a window into the hallway, and was so bitterly cold that we had no option but to move out after the second night, and seek refuge for the next – and last – two nights in La Paz in the hotel where we stayed during our previous visit; which happened to be nearby, available, and totally over budget – but well worth it if you ask me.

And without further ado, we continued our journey towards Argentina and travelled the 730 kilometres (450 miles) from La Paz to the world famous Salar de Uyuni, the largest salt flat in the world, spread over 12,000 square kilometres – which is noticeably larger than Qatar and only slightly smaller than Vanuatu.

Bolivia has some of South America’s few remaining long distance trains. Despite being slow, they remain useful because many of the parallel roads are in a terrible condition. The first stage of our journey south from La Paz was a bus ride to Oruro, three and a half hours away along a smooth, wide, direct road – in fact remarkably un-Bolivian. The bus, however, was very Bolivian. It appeared not to have been cleaned in many years and, not to put too fine a point, it stank. In Oruro we boarded the train to Uyuni after a short break. The rather misnamed Expreso del Sur – the South Express – took nearly seven hours for little over 300 kilometres, but it was at least clean and fairly comfortable, and for £5 each we had steak with chips and a large beer in the restaurant car. 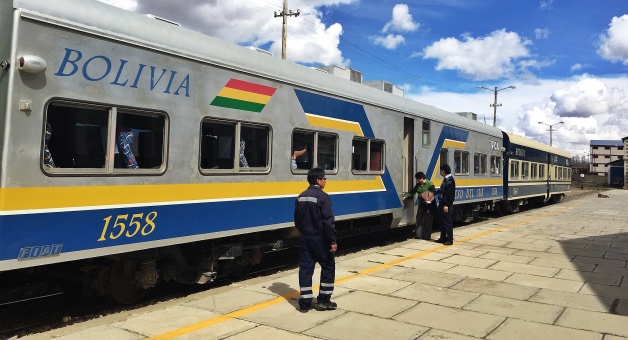 Once in Uyuni, we stayed at the same place as the previous time. When we first visited in 2011 we did a three-day tour of the salt flat plus the Eduardo Avaroa Andean Fauna National Reserve on a battered 4×4. On that occasion much of the salt flat was flooded and we couldn’t get to it, so here was our second chance. The town doesn’t really have much in it other than tour agencies and cheap places to eat, and it’s almost exclusively the main base from where to visit the salt flat and surrounding area – though to be fair it has also hosted all the off-road races of the legendary Dakar rally in 2014 and 2015, and it will do so again in 2016, so kudos Uyuni.

Opportunist tour agents pounce on the travellers that arrive on the evening train from Oruro in the hope of selling overpriced (more often than not) tours the following day. Most tours depart from Uyuni around 11:30am and there are plenty of agencies around town which offer similar services at not too dissimilar prices (except for Red Planet, who charge double than the rest because they provide English speaking guides, we were told) so it’s very advisable to browse before booking a tour. Also, space in the 4×4’s is not very generous. Seven people including the driver is the absolute acceptable maximum in our experience, even for the one-day tours. We also think a guide is unnecessary unless you don’t speak a word of Spanish, but even so; the more people in the car, the worse. There is, however, no safe bet when booking a tour. All cars are the same (they only last about five years) and if one is not filled with a group from the same agency they will fill it with people from other agencies. Different people seem to have very varied experiences regardless of the tour company, especially for the multi-day tours (you just need to read the reviews online, or check out what other bloggers have to say about it, like this one) so there is a certain amount of pot luck involved. The first time in Uyuni we booked our three-day tour with Licancabur Tours and yes we had some glitches but overall it was great. On this occasion we ended up booking a one-day tour (about eight hours) of the salar with Andrea Tours, for which we paid £15 each, including lunch, sharing a 4×4 with four other guys plus the driver. Everyone had booked with different tour agencies. There was one more passenger at first but he didn’t come with us in the end and we really welcomed the extra room.

The salar is just the most extraordinary place. Imagine standing on a slightly surreal flat white surface that goes on as far as the eye can see, all around you, and the whole of it turns into a mirror when covered in water. Our cheery driver, Roly, made a decent effort to keep us all entertained and make sure we could take home some awesome photos of the day, which we did. The other guys that came with us were also great fun, so we really enjoyed ourselves and were very glad to have come to Uyuni again. 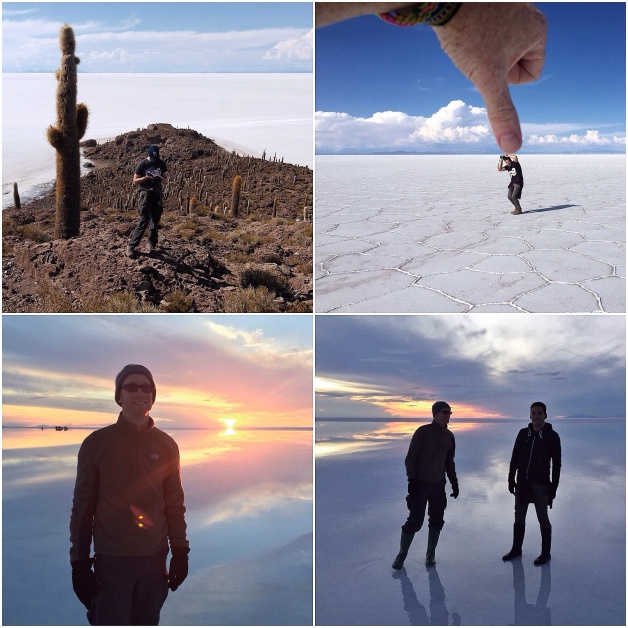 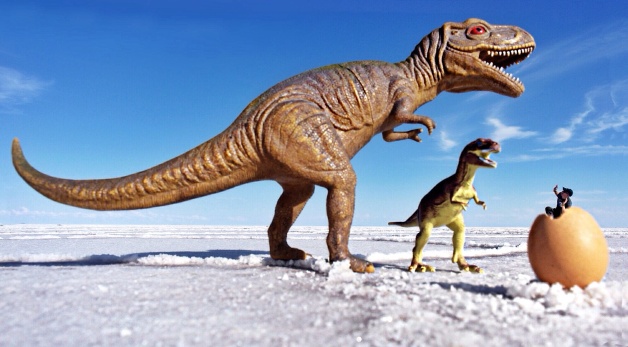 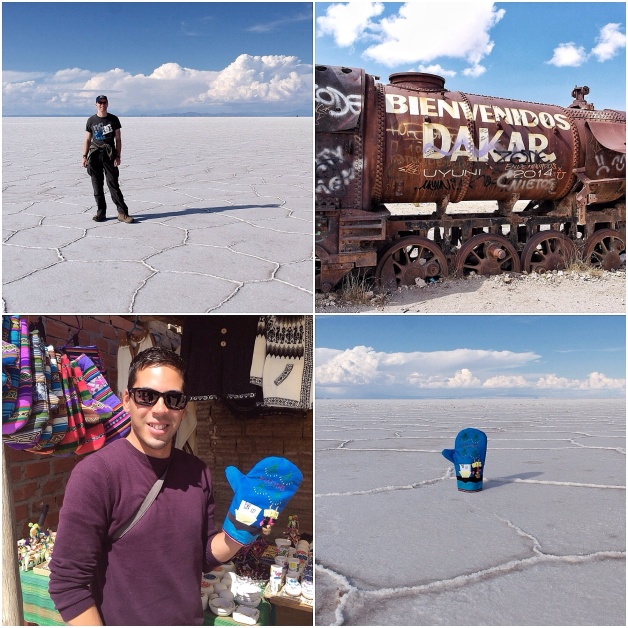 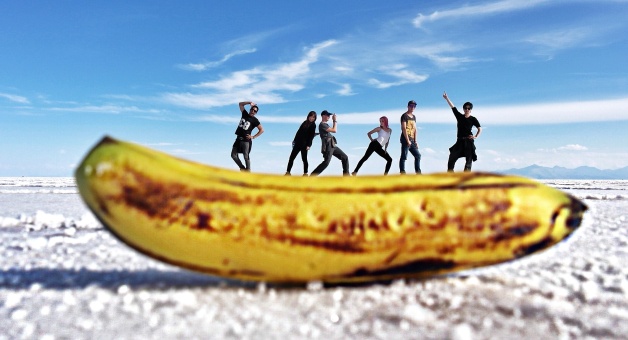 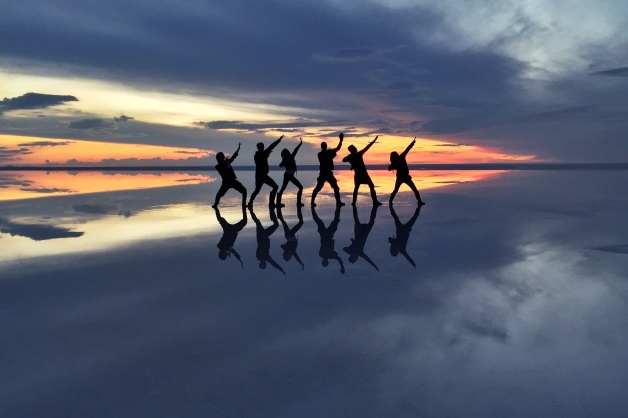 From Uyuni we needed to head to Tupiza, on our way to the border with Argentina, but there was no train running on the day we needed to travel, and the only buses south leave Uyuni at 6am or 8pm – neither of which were ideal. Fortunately, Simon found out that some vehicles from tour operators in Tupiza, which also offer tours of the salt flats etc, finish in Uyuni around lunch time and return empty to Tupiza, so it is possible to hang around the street that passes for Uyuni’s bus terminal and find a Tupiza driver willing to take passengers on his way back. Indeed, we found a driver who agreed to give us a lift for £10 each for the roughly five hour drive. On the way, we were shocked to see that both the road and the local buses were in a much worse state than we’d anticipated, and realised what a nightmare it would have been to attempt the journey by bus – we’re still reeling from our experience in northern Perú. On the up side, the landscape between Uyuni and Tupiza is quite something and after a couple of brief stops on the way we arrived without any problems for our overnight stop. Having been there twice now, we still don’t have much to say about Tupiza, other than it is not too far from the border, which we reached the next morning.

All in all we only spent one week in Bolivia but it was an excellent one. We are now chilling out in northern Argentina, where some of the finest wine in the country is produced – and currently consumed by yours truly. Slowly but inexorably – to use a cliché – we are making our way towards the final stop of our six-month trip around the world, and hands down one of my favourite cities: Buenos Aires.