PERÚ
Lima and the south coast.

As predicted, Lima was a godsend. We were more than a little exhausted after the previous week, so we really needed a few days to recharge. The apartment we rented via Airbnb was very nice and comfortable, and in a great location in the heart of Miraflores too, which was an added bonus. Despite the sunny weather I was very happy to stay indoors, but extracted myself from the comfort of the apartment for a spot of sightseeing mainly to stop Simon from going up the walls. We did a walking tour of the old town, the highlight of which was the Convento de Santo Domingo (among other things the original site of the longest continuously operating university in the American continent – a bit of trivia right there for you), where we had a guided tour and then went up the bell tower for great views over the city.

On Simon’s suggestion we also visited the excellent Museo Larco, home to a private collection of thousands of Pre-Columbian artefacts, including unique ceramics from the Moche culture (100-800 AD), which the museum is happy for visitors to photograph at leisure, in stark contrast to the Museo de Moche near Trujillo, where I was made to delete all the photos I took of the handful of objects they have on display, on the ludicrous pretext that my photos could be used to make copies of the ceramics in order to sell them as originals, then saw photographs of said objects displayed in other parts of the site, as well as plastered all over the internet.

Another museum I wanted to visit but we sadly missed on this occasion is MATE, a beautifully restored 19th century building that hosts a permanent collection of the work of Mario Testino, who was born in Lima, plus temporary exhibitions. Maybe next time!

What we didn’t miss was a chance to catch up with our Canadian friends in the bars around Miraflores, and go to some nice cafés and restaurants. Lima is not only the largest city in Perú, the world’s second driest after Cairo (more trivia), and the location of some of the oldest civilisations in human history, but it is also a foodies paradise, with two of its restaurants currently among the top 20 in the world. In a surprising “budget?, what budget?” kind of moment, Simon announced that it would be a shame not to try one of them while we were here, so I dutifully called Central in the hope that they could find a table for us that same evening. The nice man who answered the phone managed to inform me without laughing that he was dreadfully sorry but they were fully booked until the end of May. Of course. We did, however, succeed at getting a table at the eponymous restaurant on the grounds of the Huaca Pucllana (pronounced poo-kee-ana – an important archeological site in the heart of Lima). We discovered this restaurant almost by accident during our previous visit six years ago; it was just as good as we remembered, and not too budget-busting! 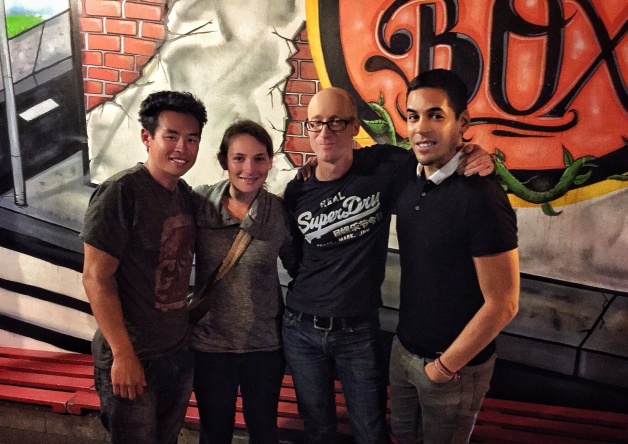 With our batteries fully charged and the travel bug nibbling at our feet, we were ready to get back on the Gringo Trail and left Lima for the coastal town of Paracas, where the main (only) attraction is a boat tour of nearby Islas Ballestas – also known as “the poor man’s Galápagos”. Indeed, the two-hour boat ride, which we booked through our hostel, was just less than 1% of the cost of going to Galápagos, but turned out to be really good. We cruised around these small, uninhabited islands which lay a few kilometres off the coast and host an amazing wealth of marine wildlife, including sea lions and dolphins, but most notably various species of seabirds like rare Humboldt penguins, Peruvian boobies, pelicans, and cormorants. Some of these birds number in the thousands; the extraordinary accumulation of guano (bird poo) on the islands is exploited commercially by a state-owned fertiliser company. About a hundred men descend on these barren islands every few years and stay on them for five to six months, mining by hand several thousand tons of pungent guano which is then shipped out for use in agriculture. I shall bear this in mind next time I think I’m having a tough day at work, once I have returned to my desk job in London. 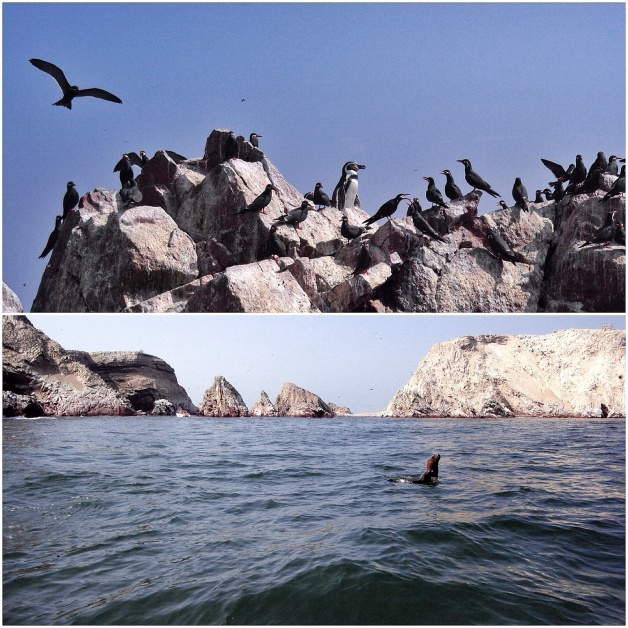 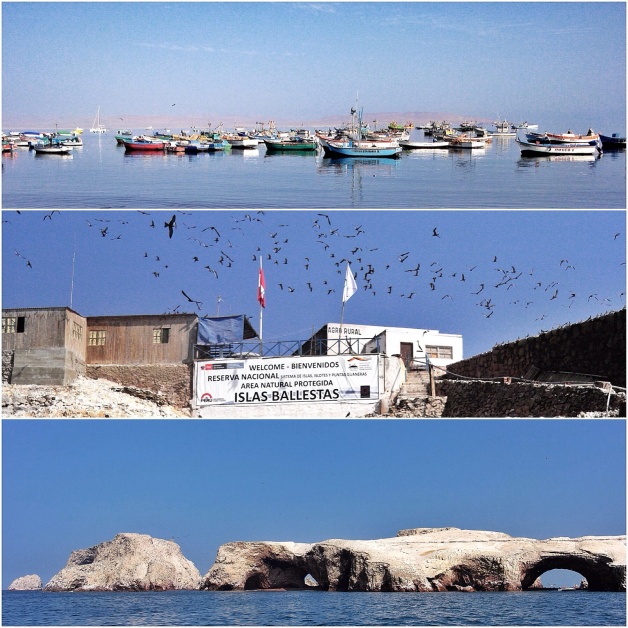 From Paracas we headed further south and slightly inland, and stopped in Huacachina for a few days. Huacachina is a desert oasis some distance off the coast, created around a natural lagoon just outside the city of Ica (birthplace of Don José de la Torre Ugarte y Alarcón, one of the original signatories of the Peruvian independence in 1821, who also wrote the lyrics to the Peruvian national anthem – another bit of trivia, you’re welcome), and surrounded by sand dunes tens of metres high. By the end of the 19th century Huacachina was practically uninhabited, until the Italian Angela Perotti rediscovered the medical properties of the water in the lagoon, specially for the treatment of skin and rheumatism illnesses. With the years it has become a very popular holiday spot among locals and young travellers from Europe (lots of Germans), North America, Japan, Australia, etc, who come here for two reasons: hurtling up, down, and all around the enormous sand dunes on funky tubular vehicles called “dune buggies”, to then slide down said enormous dunes on snowboard-like boards, or “sandboarding” – which Simon has taken to like a duck to water. On our first day here we (and about everyone else in our hostel) jumped on one of several dune buggies parked outside our hostel and off we went into the desert. Our 82 year old driver (I kid you not) could have given The Stig a run for his money. A white knuckle ride later we stopped at a certain spot on the dunes and that’s when the boards came out. One by one, people launched themselves enthusiastically down the side of the high and steep dunes, with various degrees of skill and indeed grace, one dune at a time. This went on for a couple of hours after which we all got back on the buggies and were driven back in time to see the oasis from the top of the dunes as the sun set over the desert. Not bad.

There are other things to do in Huacachina too. A certain amount of sweet red wine (Peruvians like their wine the sweeter the better) and the ubiquitous pisco (a clear, high-proof brandy-like spirit made from the distillation of grape wine) is made in the area. Grace and Jason, who arrived from Paracas a day after us, joined us in an informative, entertaining, and very generous tasting tour of two of the main local wineries – bodegas – from which it took us all a little while to recover. 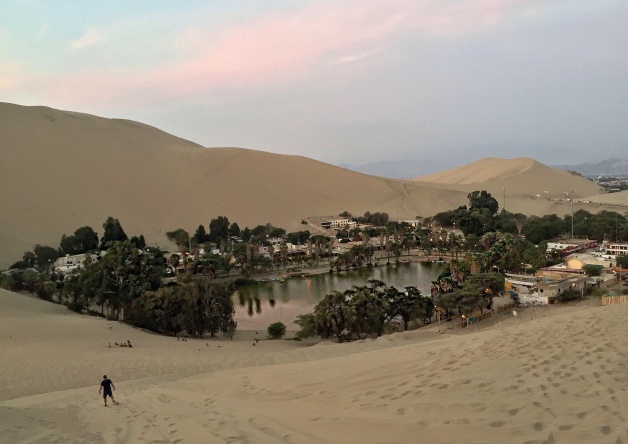 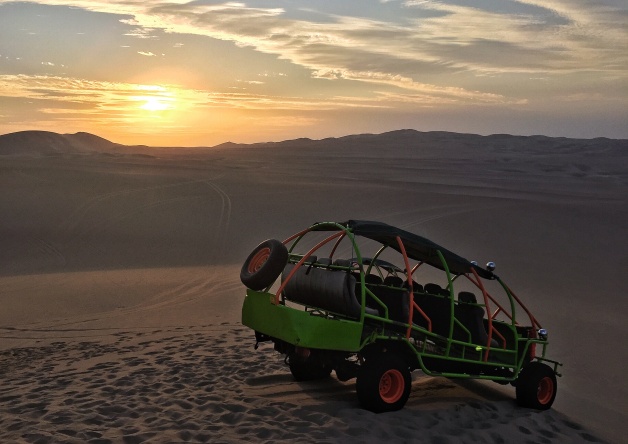 I’m very glad that things have picked up in the last ten days or so. Trujillo and Lima were great, as was the boat around the Islas Ballesta; and Huacachina (including the hostel we stayed at, which we liked a lot) is one of the most fun places we’ve been to on this trip. We really didn’t want to leave, but leave we did, and headed to our next, very exciting stop in Perú: Nazca.

2 thoughts on “Get the look for less.”